Operation World – a wealth of information

I received my copy of the new version of Operation World yesterday.  I had ordered the Professional DVD edition with many additional maps, charts and PowerPoint presentations, as well as the right to reproduce the content for ministry purposes.   It even gives me the ability to put OW on my Kindle.   The DVD edition cost $30, including shipping, and is well worth the investment.  I thought that it would be ready for me to take back to Ukraine when I was in the USA in November, but it arrived at our US office address just a couple of days after I left.   So I am just starting to investigate the wealth of resources available on the DVD.

Thus far, I have been surprised to find out that I can create my own maps, displaying for example the evangelical annual growth rate for each country of the world.  That particular map (shown below) shows that there is a solid band of countries from Senegal in western Africa, across the northern part of Africa, through the Middle East and all the way east to Kyrgyzstan – all with annual growth rates of the evangelical church ABOVE 4%.  There is no other place on the globe with such a distinctive band of countries where the church is growing as quickly.  In other words, the 10-40 Window  is where the church is growing fastest.   Amazing! 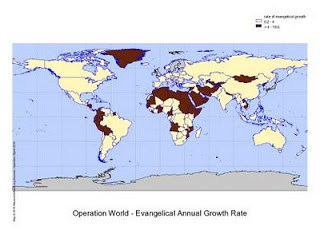 Using the data from OW, I was able to see that the evangelical population in Ukraine will be almost 8% of the entire population by the year 2030 if the current population and church growth rates continue.   By the end 2030, OW projects that the population of Canada will be nearly identical to the population of Ukraine (currently Ukraine has 11.5 million more people than Canada).   But by then, the number of evangelicals in Ukraine will be actually higher than the number of evangelicals in Canada.   Maybe by 2030, if the Lord tarries, there will be more Ukrainian missionaries in Canada than Canadian missionaries in Ukraine.

Strive to excel – but for what purpose?