A coaching culture in a mission organization? 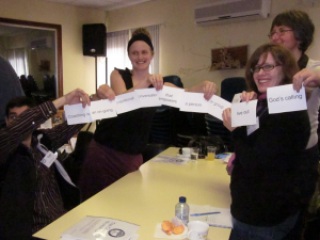 At the beginning of April Bertha and I, together with Ted Szymczak, traveled to Spain and facilitated another Coaching Workshop. The workshop was full, with 24 participants from six different mission agencies, serving in six different countries.   A large percentage of the coaching workshop is devoted to giving the participants opportunities to practice coaching one another.   And they did so with enthusiasm!   With 12 separate coaching conversations happening at the same time in one room, the noise level regularly reached 90 decibels in our training room.  The aim of the workshop is naturally on practicing skills, not on completing conversations, and so I regularly had to interrupt our eager coaches and ask them to move on to the next learning activity.   At times, I found it very difficult to regain their attention when it was time to switch to another exercise.   At one point, we even tried using a drum set standing in the room!   But I would much rather have had that problem than dealing with half-hearted participation. 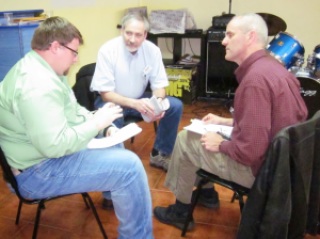 In the middle of the workshop and again at the end, we divided the participants into affinity groups and asked them to discuss how they could use coaching skills in their various ministry assignments.   I was greatly encouraged by how passionately these participants interacted during these application sessions, generating many great ideas for how to use coaching skills in church planting, member care, MK (missionary kid) schooling and mobilization.

Two years ago, SEND U purchased the license to facilitate this coaching workshop from Creative Results Management.  Since then, 67 people within SEND have completed the three-day coaching training that I have been facilitating.   Another 37 SEND members have completed shorter versions of the Coaching Workshop.   Those who see coaching as a significant part of their ministry, we have encouraged to complete the longer Core Coaching Skills Certificate program (60 hours of training).  That training is provided directly by Creative Results Management, but many of the training exercises are similar to what we do in the shorter coaching workshop, but just with more information about how to become a professional coach.   In sum, I know of at least 122 people in SEND have received some type of training in coaching.  Likely the total number is higher.   That is a little more than 20% of our membership.   As well, I know of a number of others who have expressed interest in getting training in coaching in the future.

How many people in SEND have been coached?

I am afraid that I don’t have a good answer to that question.   For the first few years, I tried to keep records of all those in our organization who were in formal coaching series, but the reports I received were always incomplete, and eventually, we decided to discontinue trying to track who was coaching whom.   From those incomplete records, I know of at least 115 people in the organization who have been in a formal coaching relationship, and many of those have been coached through several series.   Our most experienced coach has logged 425 hours of coaching over the past 5 years, and almost all of that has been with SEND coaching clients.

But coaching includes much more than just formal coaching series.   The vast majority of those we train in our coaching workshops have no intention of becoming regular professional coaches.  They just want to use coaching skills in their ministry and leadership – to learn to ask better questions, to listen more effectively, to help others follow through on action steps.   And that is the real objective of the Coaching Workshop!   The sub-title of the participant manual is “Powerful Leadership Skills for Solving Problems, Reaching Goals, & Developing Others“.

So we want to see informal coaching happening throughout our mission organization – in conversations between co-workers, in meetings between supervisors and their team members, in talks with non-Christian friends over coffee.   Sometimes we refer to this informal coaching as undercover coaching or coaching in the moment.

Back in 2008, we in SEND U set as our objective to establish a coaching culture within SEND International.

I do not believe that we are there yet.   Just because 20% of our membership have received training in coaching does not mean that this 20 % are all regularly coaching or using coaching skills.  Just because at least 20% of our membership has been in a formal coaching relationship and dozens of others have been coached informally doesn’t mean that all of them are continuing to grow as a result of their coaching experience.  But we are definitely further along the road than we were 5 years ago.

What has been instrumental in developing the coaching culture?

Yesterday, I was asked that question by my former coach and trainer, Keith Webb.   I believe that exposing our field missionaries to coaching has convinced many of them of its value.   I frequently share my own story of how much I learned from my first coaching experience (with Keith) back in 2007.    Because of how positive an experience that was, how transformative it was for my leadership, I became an incessant advocate of coaching throughout the mission.  We require all of our first term missionaries to be coached as part of our MOP-up program and those who have been coached are generally giving very positive evaluations of their coaching experience.  The majority of these first-termers have said they really appreciated the coaching, and will definitely want to be coached in the future. This orientation to coaching was one of our goals of MOP-up and we are very pleased with the response!  One by one, our missionaries are asking for coaching, and slowly questions and objections they had to this new style of helping people have gained acceptance, as they have seen how it has helped them make progress in different areas of their life and ministry.

Key to this adoption of coaching has also been that our leaders in SEND have bought into the value of coaching.  Most of our field leaders have been coached at some point, and some of them have been in several long-term coaching series.  The vast majority of our field leaders have also received some training in coaching.   A few years ago, just as we were starting to promote coaching, we provided 6 hours of training in coaching for all the participants at our Directors’ Council.  In the training that I just facilitated in Spain last month, the participants included four of our field leaders and their spouses. Those who serve on the International Leadership Team have an average of 47 hours of training each.  Our International Director himself promotes the value of coaching in his public communication, in his regular use of coaching questions in his leadership and in his desire to be coached by others.

I welcome any suggestions or stories from those who read my blog about what you think would be helpful to further develop a coaching culture within a mission organization.   Leave a comment, please!

The wilderness as a classroom

The other 76% of the training value